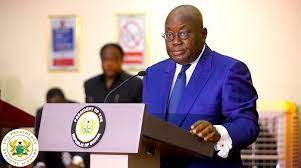 Nana Akufo-Addo says many countries across the world are suffering from an economic meltdown.

Speaking at the swearing-in of some new Ambassadors and High Commissioners at the Jubilee House, Nana Akufo-Addo said Ghana’s economy will bounce back.

“I am confident that with determination, hard work, unity, and the proverbial Ghanaian sense of enterprise, we will succeed, we will make it and indeed this too shall pass”.

He explained that all the countries of the world were working to return themselves to a state of normalcy following the devastating impact of the pandemic whose effects have been exacerbated by the Russian invasion of Ukraine.

“Economies have been plunged into recession, businesses have collapsed, lives and livelihoods have been disrupted, food and fuel prices have escalated dramatically as global and domestic inflation mount.”

“In our case, we have decided to seek the collaboration with the International Monetary Fund to repair in the short run, our public finances, which have taken a severe hit in very recent times,” he added.

Labour unions including TUC have lambasted the government for its decision to seek support from the fund.

They said government resorting to the IMF means the economy will likely reel under several restrictions and controls to be imposed by the fund.

Civil society organisations also expressed their displeasure at the government’s request for a bail-out from the IMF.

They corroborated the concerns of TUC saying the economic hardship being endured by the people of Ghana will get worse with IMF restrictions.

The meeting saw the IMF examining the government’s fiscal expenditure and projections for the year 2022.